Out of Exile - Part I

When I first came to this island

That I called by my own name

I was happy in this fortress

In my exile I remained.

Alright, first things first. My name is not Dalhousie (my parents didn't, and probably don't, hate me so much), but for the sake of poetic pretentions, let us assume for the duration you take to read this post, that my name is, in fact, Dalhousie, which is where I went recently with my childhood friend Nitin. We decided to call it our exile because both of us were tired of our mundane and single-ularly uneventful existences in Delhi and wanted a change. For the sake of completeness, I also wanted to free myself of all the technology that I was dealing with on a day to day basis. So the only piece of electronics I carried on my person were two cameras, one nearly conking off (mine) and one class act (my friend's). I mention this because, as you will find out, these cameras pretty much underlined how it all went.

Right then, so on one Thursday night last week (I'm on a month long vacation, and quite dangerously, have lost track of dates), we moved from Delhi to Pathankot by bus and took another one to Dalhousie upon arrival in Pathankot. With the result, we landed up in Dalhousie at around 10, on what seemed to be a damp and soddy friday morning. Since, in India, we seem to blame everything distruptive on the West, let us also blame this lack of sunshine on my shoulders on the Western disturbance. After having found ourselves a crib to stay in, we decided to explore town and go to this place called Subhash Baouli (apparently Subhash Chandra Bose loved this place). Now, Nitin and I are both fans of the talk, with one critical difference, I love the walk, and he's quite averse to it, if there exists a logical alternative like a taxi. Therefore, to goad him to walk about 4 kms of hillside, he needs great incentive. It is little surprise then, that I was showered with an eclectic mix of abuse when we landed at the old S.B and found that it was nothing but a small gazebo on the hillside with old S.C.B's (apologies to my Bong brothers) bust on it. There was some solace though. Nitin gets quite happy when he sees snow-capped mountains (as do I) and the clouds parted briefly to allow us our first glimpse of the Pir Panjal range. A few pretentious photographs where we pretended to be studs who didn't really care about the pics that were being taken (as self-shots), where we were looking in random directions, and a long walk later, we were back at our hotel room, where it got sinfully cold. Nitin was then taught the finer nuances of Texas-Holdem poker (my corruption to which, has been well documented in my series of posts on my Leh trip).

We'd planned to wake up early on the second day and take a 10km long trek. "yeah right!", you say? Right, you are. We woke up at noon to a rainy afternoon. 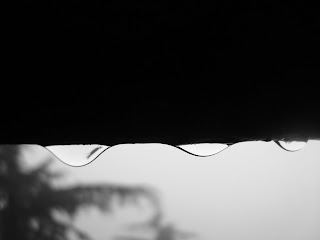 (Right: Damp morning)Thankfully, the rain stopped by afternoon and we were left with the most majestic scene in front of us. Damp and foggy, yet amazingly beautiful hill-slopes. We decided to walk another 5 kms to a place called Panchpulla, which sounded very inviting on the tourist info booklet we were carrying. But as Nitin's luck would have it, we landed up at a measly martyr memorial. All the water that was supposed to flow under the Paanch Pul (five bridges) had been siphoned off to meet the city's water needs. The walk, however, was quite fantastic with a view of the sun setting behind clouds. Having had enough of the walk, we took a cab back to our hotel room and upon arrival, we realised that one of the cameras(mine) was missing. We spent an extra 200 quid to go back to the same place to hunt for the camera, but it was gone. And that's how I lost my old, conking off, beloved camera, with all of the first day's pics on it. (Right: Walking to Panchpulla) 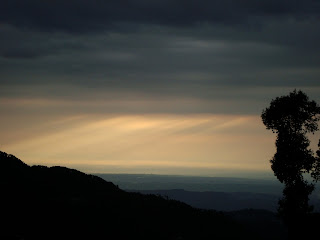 Thankfully, though, we had the other camera to get us by.

With nothing to do, but to rue the loss of the beloved camera, we piled on loads of good cheap food (of which, you need a lot, to keep the fire running), and retired for the night, hoping for a bright day the next morning.
Posted by Wanderer at 1:11 PM

Is this MYYY camera??? I think you should mention my NAME you know!!