Apollo 13 - The Bhutan Chronicles Part I

On April 11, 1970 at 1313 hrs, NASA launched the Apollo 13 mission to the moon. While on its way to the moon, there was an explosion in one of the service module's oxygen tanks which blew out most of the spacecraft's systems. At this point, the mission changed. The mission was no longer to get the astronauts on the moon, but to bring them back alive. NASA succeeded at this new mission and achieved what has been called one of the greatest rescues ever. Some people also called this mission a "successful failure" because they were never able to land on the moon and yet, all the astronauts were back home, safe and sound, despite the overwhelming odds.
What the above story has to do with a recent family trip to Bhutan, is something that will evolve over the next few lines. When I was cycling through the possible titles I would give this post, I also considered naming it "Aila Re", and that would have been the title if we hadn't succeeded in surmounting the glitch thrown at us by a cyclone with the same name. On to my travelogue then...

On 24th May, my mother, my sister and I flew to Guwahati to join my father. As I always do, I had checked online, the weather forecast for Bhutan for the next week. The outlook didn't look good. "Heavy rain and thundershowers" is not what you want to stare at you from your computer screen just hours before you leave for a vacation (of which, one may contend, I have had a sumptuous number of in this year). We had grand plans of touring the country from west to east by road, Eastern Bhutan with its mountainous terrain being my primary area of interest. Nevertheless, I kept this disappointing bit of information to myself and prayed hard that some freak wind mind blow and the rain would drift to some other parched parts of the world.

We set out from Guwahati for the Jaigaon-Phuentsholing border in West Bengal (the only road-entry point into Bhutan) on the morning of the 25th. The weather seemed to behave itself and while it was cloudy, there was no water being showered at us from above. All that changed, however, as we crossed the Bongaigaon oil refinery around noon. The first drops appeared on our windshields, and it would be safe to say that my face lost about two-thirds of its colour which translated into another three faces losing two-thirds of their colour once I shared the information I had read two nights ago. It was about six in the evening when we reached Jaigaon, the Indian side of the Indo-Bhutan border. It was too late to complete the paper work, so we had no choice but to stay at the Indian side of the border for the night. I say "no choice" because the Indian side of the border is as chaotic a border town there is. The roads are filled potholes and lined with garbage on the side. There are no great hotels to stay at either. It's crowded and depressing, manic; almost(below). 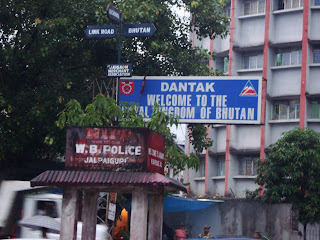 It started to pour that night, like it had never poured before. I switched on the TV in my room at night, to find that a cyclone named "Aila" had hit the West Bengal coast, and it's tail was lashing, of all places, my place. My family and I have had a fair amount of bad luck when touring the north-east. We were greeted by landslides in Sikkim, nearly got killed (still alive, all four of us) in Arunachal last year, and now this.

The next morning, then, I woke up to a dull grey morning, and underwear-clad Bengali uncles and aunties chattering loudly in the wide hallway about a range of topics (the Communist Party mainly). Funnily enough, the harder I prayed for the rain to stop, the harder it rained. Nevertheless, we gathered the courage to get ready and cross over. I have crossed a few borders by road in my life (Pakistan and Nepal being the previous one). When you cross over by road, you expect to observe a certain degree of continuity across the border before the actual country materializes. This however, was not the case with the Phuentsholing border. The moment we crossed, the noise died away, the dirt vanished, the roads were broader, potholes fewer, the rain(however); still pouring down (below). 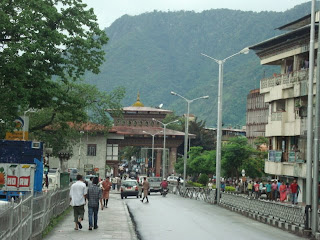 Drenched as my father and I were, we somehow made it to the immigration office on the other side of the border to obtain our route permit. This is where we were informed that the documents for my sister and our driver were insufficient and we would have to visit the Indian consulate for identification papers in order to enter. This leads me to my first travel advisory for Bhutan:

Bhutan Travel Advisory #1: While Indians don't require a visa for Bhutan, the only identification accepted are valid passports and voter ID cards. That includes your driver. Any other ID will land you at the consulate, looking for them to issue identification papers, which is grossly painful (decent euphimism).

My sister had her board exam admit card and my driver only had his driving licence. What followed was a very painful search for the Indian consulate at Phuentsholing. Most roads were one-way, and our driver was suddenly having epiphanies about how his driving licence was really farce, and was needless to say rather nervous about breaking any local driving laws. I don't blame him. Thirteen years of indisciplined driving on Indian roads needed to be unlearned. At the Indian consulate, we had a rendezvous with a man we would not classify in the "jovial" category. After giving our driver a dressing down for not possessing adequate identification, he insisted that my mother (being a government servant) produce a no-objection certificate from her office. This sent us into a tizzy and we hurriedly returned to the Indian side to obtain the remaining documents by fax. Rather (very rare) efficient handling from my mother's office ensured that we had the documents ready in about two hours and soon enough, we were issued our permits to stay and travel till Thimphu. The rain stopped and it finally seemed like everything was alright. It was too late to start for Thimphu, so we decided to spend a night at Phuentsholing. A separate permit was required for the vehicle and we took a short trip to the Inter State Bus Terminus (which looked nothing short of a palace from the outside (below)). Here we were informed that two days of incessant rain had caused massive landslides and road-blocks. 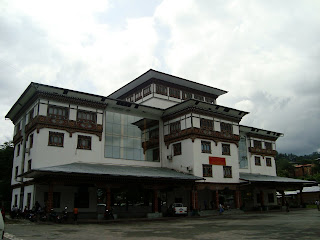 Bhutan Travel Advisory #2 : Carry atleast 5 passport size photographs. If you take a vehicle into Bhutan, make sure you carry drivers' licences the registration and insurance certificates.

Bhutan Travel Advisory #3: If you should stay over at the border, stay on the Bhutanese side. No permits are required to stay overnight. The place is cleaner, the hotels are much better and charge very nearly the same. Bhutan Standard Time runs half an hour ahead of Indian Standard Time.

Bhutan Travel Advisory #4: Always carry an umbrella or a raincoat. It rains out of nowhere and it comes down hard, even when cyclone Aila is not ruining your vacation.


The next morning, local news channels carried images of the river Wang Chhu breaching its barriers and washing away truckloads of land with it. We were informed by the road authorities that the road from Phuentsholing to Thimphu was blocked and would only be cleared in three days at the very least. This was our Apollo 13 moment.
Posted by Wanderer at 8:06 PM

Thanks for sharing best travel information on Trip to Bhutan. I have also found one website which offier similar services "Holiday in Bhutan,Trip to Bhutan,Group Tour to Bhutan,Private Tour Bhutan,Festival Tour in Bhutan.".